Can I Hate the Movie, “The Fault in Our Stars?” – A Review from a Christian Perspective

Oh boy, I opened up a can of worms last month  I took the advice of a few Christian moms and several teens we knew and went to see, “The Fault in Our Stars.”

Because I neglected to read any reviews of this movie, and trusted the ideas of those who had recommended it, I was in for an unpleasant surprise.

Before you read further- this post will be CHOCK FULL of spoilers. If you plan to see this film, this post will pretty much tell you every plot twist and turn. Stop reading now if you will hate me for it.

Here is how the can of worms got opened:

The Fault In Our Stars: don’t waste your time. Two hours of teens flapping in the winds of life, unguided by their parents, and without Jesus.#NoRedemptionIsTheSaddestStoryOfThisWorld

(Duncan, by the way is my dear husband)

I concur. The three teens we took to see it completely agreed. It was the epitome of hopelessness and immorality. Just because a movie can move you to tears does not make it worthwhile.

So here is very short synopsis of the film: Two teens, both cancer patients meet at a support group meeting and fall in love. (Here is where I start to feel guilty about hating this film). Who doesn’t love a story where two people who may never, ever have a chance for love due to a terminal illness actually fall in love with each other?
But that’s not where the story ends.  And here is where the controversy begins. You already saw my opinion:

It was the epitome of hopelessness and immorality. Just because a movie can move you to tears does not make it worthwhile.
Yet, why on earth are Christian parents seeing this film, and even encouraging their kids to go see it?

The film, from what I could see did the usual secular mocking of purity. In a conversation between the two teens: I am paraphrasing here, “You mean you’re still a virgin?!? I can’t believe it.” And he (Augustus) spoke of his own purity as a disease which must be eradicated. That was just against everything I must support In fact, the day after they had sex, rather than declaring their love for one another, they treated it as one would a sports victory. Her note she left behind was like this: 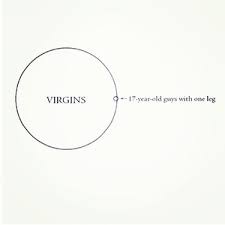 Basically, a diagram showing how a 17-year old boy with no leg was no longer a virgin. Not really a declaration of eternal love, as some would imagine.
What is the movie’s stand on hopelessness and Christianity?

Hopelessness is defined as no hope. And what hope have these two characters? For the Christian, to die is gain. There is no hope in this movie because because as far we know, both characters die with no faith. Truly hopelessness in the real sense of the word. So it was painful to watch this movie, not because of the death. But because of the sadness of dying with the best, most important thing you can think to do is go buy a pack of cigarettes that you won’t smoke.

I exactly think what an unbeliever would think of this movie. They would be led toward the Epicurean theme as portrayed in this film. “Live a good life, because that is the best as it gets.” How sad, because life is so much more than that. Where is Gus now, based on his wishy-washy views of a possible afterlife? Is that where we want our atheist friends to end up?
To address the idea of Augustus’ religion, the movie only had one Christian represented in the film. A washed-out 30 something that lived in his parents basement and did hook rugs of Jesus and called it the “Heart of Jesus”. Now, if they had left religion out of the picture altogether it would have been better.

This was a well-made film.  But it was a well- made film about hopelessness and immorality.  And yes, there are some lessons that could be learned from this film as well. Cancer sucks. Parents try to offer help to their children that sometimes don’t actually help. You can buy cigarettes and not smoke them. People make promises they can’t keep, or don’t understand. It’s ok to egg someone’s car if you are sad they broke up with you.
But really, those are not lessons I need (nor hopefully do my children). We have loving friends who just this year died after horrific, brave, beautiful battles with cancer. Someone should make a movie of their lives. In their last days they were not thinking of buying cigarettes, but of encouraging those they left behind. They spent their hours dying (many, many hours) spreading truth and love to their caregivers, their imperfect family and imperfect friends. The lessons at their funerals were far greater than this film.

This movie was somewhat out of the ordinary, and that made it interesting to watch. But I had to spend so much of the time in this film suspending my own values and beliefs that it was painful to watch. It was like watching a two-hour funeral for someone not saved. Just sad, and disappointing.
Good qualities in the film:

There were some decent elements to this film.  We did pick up some one-liners that our family has already added to our vernacular. I did love the way that Hazel Grace showed respect, adoration and love to her parents, even when they disagreed.  I also like the way her parent listened to her, and understanding her limitations tried to help her live as full a life as possible. I liked how Hazel was concerned about how her parents would do after her death, and I love the way that was resolved in the film. I like how she handled the speech at the funeral- using it as a time to encourage and help his parents, rather than focusing on her own pain and relationship- in that moment, she got it. It was not about her- it was, in that case, about those left behind to grieve the loss of their loved one.
I also like how she was able to pick up the pieces left behind by the drunk, crazy writer. She handled that admirably- realizing he had no control over how she felt or the outcome of the trip, but nor did she give him the opportunity to continue his insane emotional abuse on her by sharing his whacked-out wisdom. She had become stronger and realized she did not need it.  I also really, really liked Augustus’ character. He was easy to like because he had gotten so many things right.  But sadly, he missed the mark on the most important thing.  I see some great quotes coming from this movie that are inspiring and loving and wonderful. I also see people clinging to those so much that they forget they had to suspend their heart-felt values to get to them. 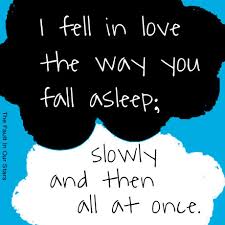 Hang out with me!